another set of great results… 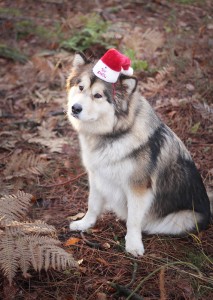 A very busy month seeing Arctictribe attend 4 rallies.. all of which are 2 day events, most of which had double figure class entries..

Penny and Sampson continue to show us what they are made of.. slowly building stamina through training and racing.. Sampson is proving to be the driving force with Penny following his lead and matching him in strength.. this season was all about having fun and confidence building.. but it seems these two intend on taking things to the max….

Leo shares the racing with Sampson’s sister having lots of fun .. 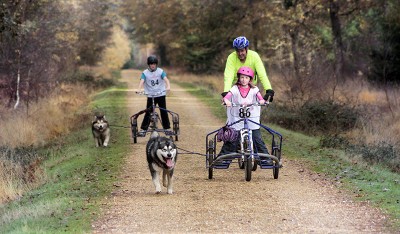 The best photo of a great month!! 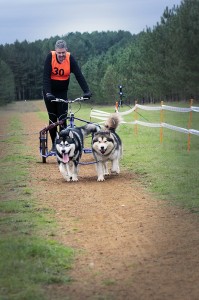 Leo runs with Sampsons sister ‘Memphis’ showing her the ropes.. 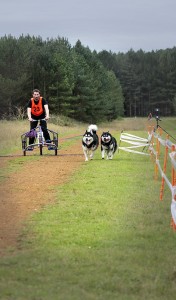 Penny then runs the Junior class with our son ‘Hayden’ (unsupervised) and gain a podium place finish coming 3rd and also fastest Alaskan Malamute in class!! 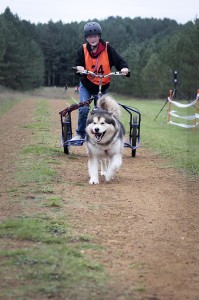 Leo also takes our daughter ‘Keira’ round the supervised Junior class.. A really wonderful weekend was had by all .. 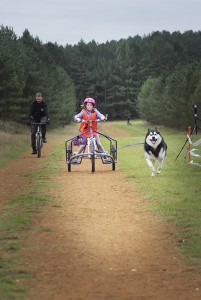 This month is always a good one due to our annual holiday at the AMWA fun/training weekend, but little did we know what else August had in store for Arctictribe……..

At Bournemouth Championship CC show Sampson absolutely blows us all away winning not only 1st in a very strong Junior class (his 1st class out of puppy).. but he then is awarded with the Reserve Challenge Certificate!! wow what a moment that was.. he gains life time CRUFTS qualification AND his KC STUDBOOK NUMBER at a tender 13 months old…… 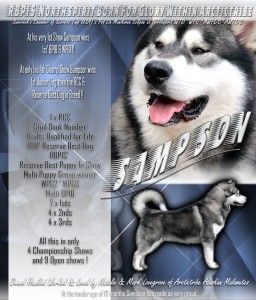 The day’s wonderful results didn’t end there!! .. seeing ‘Leo’ win 3rd in Postgraduate Dog qualifying him for CRUFTS 2015 at only his 2nd Champ Show this year!! – this means he has qualified every year so far …..

At the end of the month we go on our annual holiday with AMWA, once again the tribe have a brilliant time away and get to chat & laugh with friends ‘old and New’ – This year sees Natalie judging the novelty classes and also award the very first ‘Best Working Dog In Show’ award..

This month sees birthday cake galore… Penny and Sampson turn 1 yr old and Leo turns 2 .. they were all thoroughly spoilt 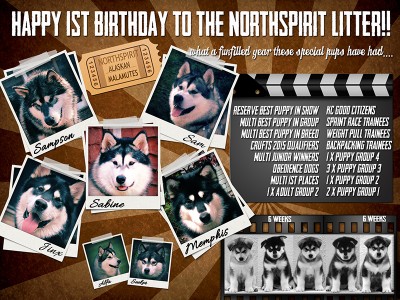 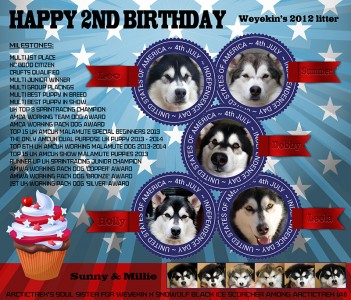 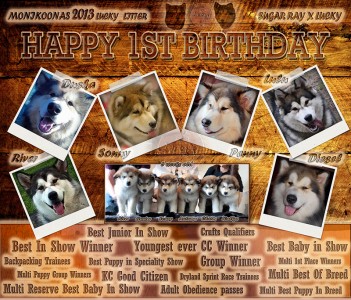 This month see’s Sampson win 2nd place in his last puppy class at Three Counties Championship CC show.. and he was very out of coat! 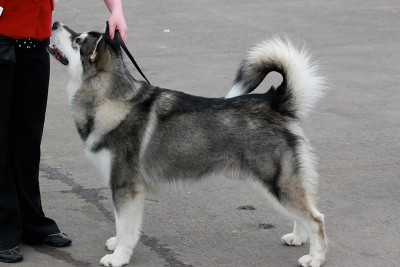 Leo gains a 3rd place at a local show in a mixed breed class Penny is the star of the month winning 2 x 1st Places at the same show!!

The weather is warming up so Arctictribe attend a few shows.. this month collectively the tribe do very well being awarded the following: 1 x 2nd ‘ 5 x 3rds & 1 x Reserve These results are from Championship and Open shows

One of these awards however has a very special meaning.. Sampson at only his 2nd Championship qualifies for Crufts 2015!!! 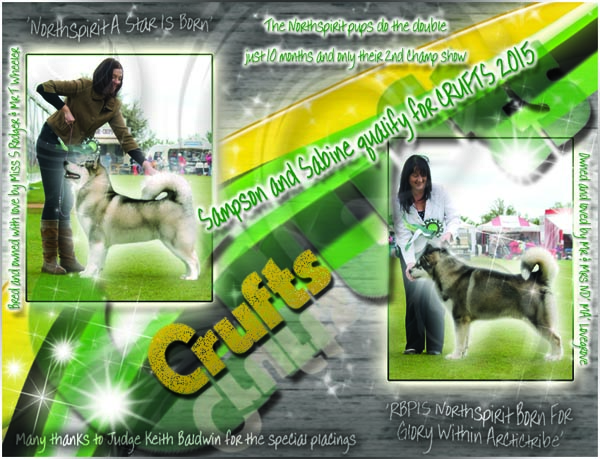 The Awards for UK Show Alaskan Malamute of the UK for 2013 are out and wow did Leo do well.. In only 10 shows and only 5 in Puppy he is awarded with the following:

Sampson and Leo attend WELKS Championship show and what superstars they are.. Sampsons first Championship show and only his 6th in total he wins RESERVE in a stunning Puppy Dog class!! Then in a humungous Postgraduate Dog class 12!! Leo wins VHC!!!.. we’re very proud of the boys not just for the placings but for their fantastic manners at such a big show..

Family news at WELKS Championship show sees Sabine (Sampsons sister) win VHC in Puppy Bitch River (Pennys sister) wins RESERVE in Puppy Bitch And Sonny (Pennys brother) pulling everything out of the bag to make Malamute history!!!! Sonny ‘Monikoona Most Wanted’ win 1st Puppy Dog’ Best Puppy Dog’ BEST PUPPY IN BREED’ then winning the Dog CC.. and then winning Best of Breed!!! Sonny is only 9 months old and is now the youngest Malamute in history to win a CC also gaining his stud book number and qualifying him for CRUFTS for life!!!

In Leo’s first working season he came 6th in the whole of the UK for the Working Malamute 2013-2014 award.. Leo is also the only UK Malamute Puppy to be awarded a dual working and showing award in 2013-2014!!

This award is through a combination of sprint racing and weight pulling. 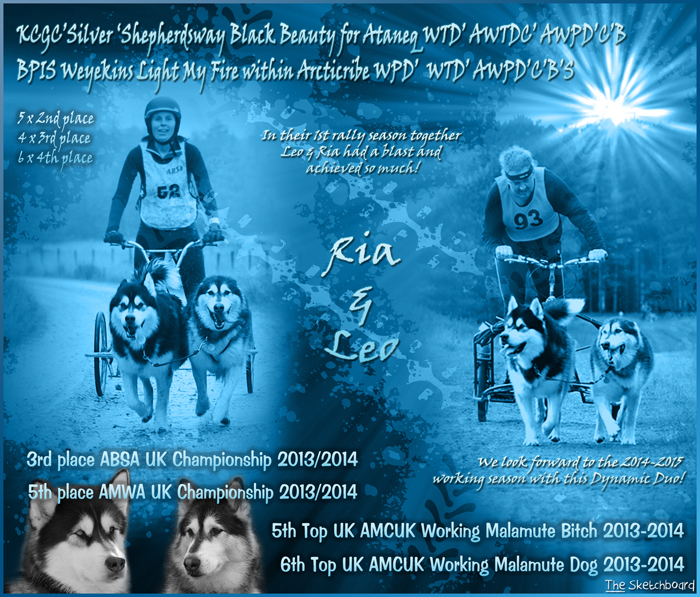 A fabulous start to the month sees Sampson ruling the ring once again…. He yet again wins his Junior class 1st Junior, yet again he is awarded with Best Puppy in Breed, and then is awarded with yet another Puppy Group.. this time WPG2!! and still only 7 months old!

The very next day see’s Leo and Ria attend the last race of the ABSA UK Championships 2013-2014 with Vikki.. they have a lovely run and work so well together, they come in 4th on the day but the overall Championship result is outstanding.. Arctictribe are very proud to announce that Leo and Ria win an amazing 3rd place in the Last ever ABSA UK EF Championship, we are hugely proud considering this was Leo’s first ever working season!!

The next evening not to be outdone and miss out on the awards ‘Penny’ ‘Monikoonas Lucky Penny within Arctictribe’ passes her adult Bronze obedience level.. well done Miss Penny!!

Just 4 days later sees ‘Leo’ strut his stuff at the Worlds Greatest Dog Show ‘CRUFTS’ although unplaced he was a pleasure to show, we had a lovely time posing on the green carpet.. Leo more than earnt his place seeing him qualify for CRUFTS at every Championship Dog Show he attended last year.

Leo attends his first ever weightpull competition and pulls in a very respectable 3rd place in his weight class!

The end of the month sees ‘Leo’ and ‘Ria’ battle the trails together for their very last last to complete a full 2013-2014 rally season at AMWA Swinley.. On the final race they come 4th place which also awards them 5th place in the AMWA 2013-2014 UK Championships with Mark as musher. Huge well done team!!

The happiness and success continue this month…. 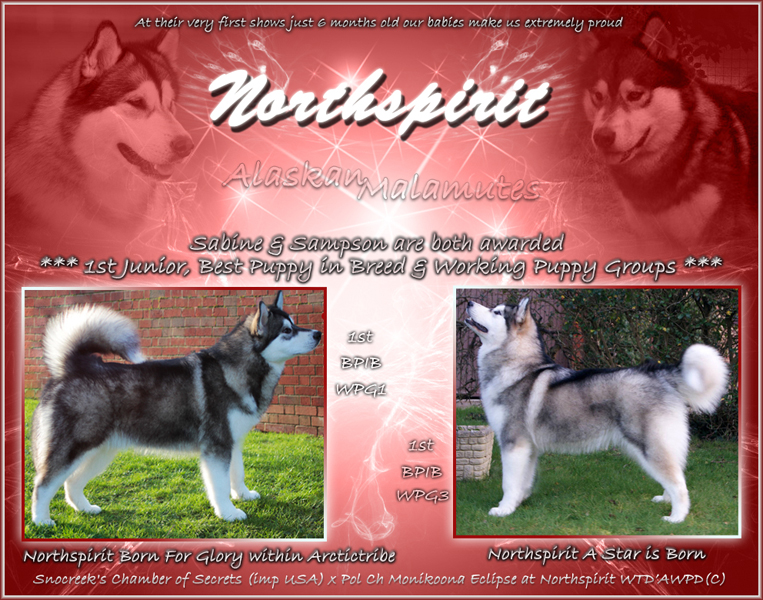 On the same day in the evening Leo and Ria battle the trails at ABSA’s Rondy By Night and gain a very respectable 3rd all Malamute team.. they had a lovely time together once again….

A week later Leo and Ria once again battle the trails.. this time at AMCUK Yately with Mark, the team work so well together and win 2nd place!!

Sampson and Leo attend a show together and both come a respectable 2nd place in both their classes.. well done boys! 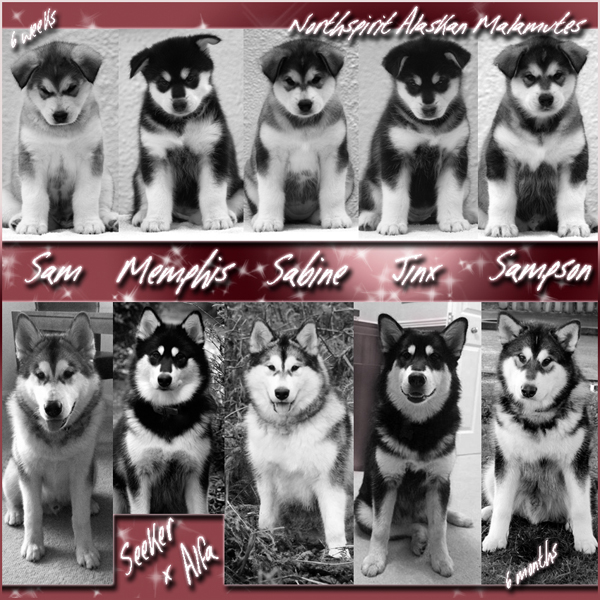 Firstly a very Happy New Year to everyone!!

The year starts off for Arctictribe with Leo and Ria completing a 2 day Sprint race in Wareham.. They come in a very pleasing 4th on the 1st day and a wonderful 3rd place on the 2nd day!!

The very next weekend sees Leo and ria attend another 2 day event with an amazing 2nd place overall!!!!

Later in the month sees Leo and Mark complete the final 2 x 20 mile backpacking legs to complete Leo’s ‘Silver‘ award Leo is the very first Malamute in the UK to achieve this wonderful award and very deserving it is too.. no easy feat!!! so Leo’s Sunday name will now be as follows:

To end the month our rising star ‘Sampson‘ wows us with his awards at his very first show…..

On the day ‘Northspirit Born For Glory within Arctictribe’ wins his junior class ‘1st Junior‘, then wins Best Puppy in Breed ‘BPIB’ and then goes on to win the Working Puppy Group from a full Group!! WPG1 !!! we are over the moon with these first results…