The working season begins for Arctictribe..

The 1st rally of the season .. AMWA Kings Forest..  Mark and Sampson storm ahead to win 3rd place in M1 after a problematic 1st stage on the Saturday evening.. the 2nd stage saw Sampson do what he does best and power round the trail.. absolutely the best working malamute we’ve ever had!!

Far too warm for harness work the showing continues.. Leo and Penny once again have some fantastic results this month….

At NWPBS CC Championship Show Leo wins his last ever Postgraduate Dog class out of a really fabulous class of quality dogs.. Penny is awarded 3rd place in her postgraduate class out of a large entry and yet again another Crufts qualifying placing!

Over the weekend of 3 shows in 48 hrs Penny and Leo rack up some more lovely placings.. 3 x 3rds and 1 x Reserve between them.  A special mention has to go to Penny’s litter brother ‘Sonny’ who took BIS at the AMCUK Club show.. very proud to witness this wonderful accolade….. a very lovely memorable weekend

Some wonderful show results this month for Leo & Penny

Mark takes Penny to a KC run dog show and they win their Class – 1st AV Open, then go on to win BEST AV and ultimately BEST IN SHOW !!

At 3 Counties CC Champ show Leo is placed a fantastic 2nd in Limit Dog yet again (9 entries)
Penny however wows us by winning her class – 1st Postgraduate Bitch and qualifying for CRUFTS 2017 in style!!!

At Bath Championship Dog Show Leo is awarded with a fantastic 2nd in Limit Dog against 9 in the class.  This wonderful placing also Qualified Leo for CRUFTS 2017.

Leo, Penny & Sampson have their annual eye tests and we’re very pleased to announce that they are all clear for HC.

The postman sent some fantastic mail this month… 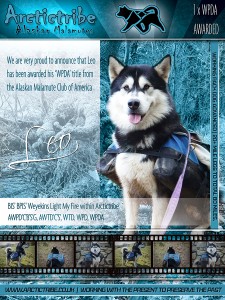 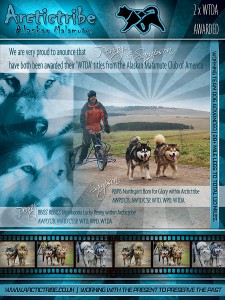 Leo gains a 2nd place in Limit Dog at WPBW Championship Show.. We are very pleased with this result being only his 2nd time in Limit Dog class!!

Leo and Natalie head off to explore the wilds of Exmoor for a spot of backpacking with good friends. An overnight self sufficient campout in minus figures with snow, ice and very steep inclines/descents certainly tested them both physically and mentally.  This trip was made even more memorable as it enabled Leo to be awarded with his AMWA GOLD Backpacking Title!!

The very next weekend saw Leo and Natalie attend the worlds Greatest Dog Show – CRUFTS, Leo was entered into Limit Dog class (13 entries) for the first time and nothing was expected… But Leo had other ideas and strutted his stuff to win him a wonderful VHC Placing!!

Later in the month saw the last AMWA Rally of the season, unfortunately only Leo could attend due to family illness and Penny being in season.. Leo had a fantastic time completing all 3 races in 24 hrs with team mate ‘Shyla’ and adoptive dad ‘Glen Ward’ – coming a very respectable 6th place overall.

Leo with team mate Shyla came 9th out of 27 teams in M2 – they only ran 3 races together!!

A complete mix of trekking, backpacking & racing this month with amazing and honourable results in all disciplines for Arctictribe

Sampson, Penny & Mark complete their highest mileage in a single trip this month – 34 miles, still at their average pace of 6-7mph overall.. the next day they were both as fresh as daisies and raring to go again!

Sampson carries on backpacking on the days he isn’t trekking.. (this boy is being nicknamed ‘Arnie’ – The Machine!) He completes his AMWA Bronze title and his AMCA WPD, he also completes the first leg of his AMWA Silver title – 15 miles carrying 30% bodyweight over tough terrain..

Over the last 13 weeks Arctictribe has been taking part in a completely new Worldwide mileage competition called the ‘Yu Can Quest’ run by the SHCNI – There were various Nordic classes of up to 5 dogs and a mix of dog breeds.  Teams took part from all over the world including USA, France, Sweden and lots more….

When the final results for the ‘Mileage Marathon’ were announced we were left almost speechless!!

But by far even more remarkable is that Mark, Penny & Sampson actually came 2nd in the WHOLE COMPETITION!!! – only beaten by ‘Urban Legends’ and their 3 dog team..

Leo attends a local show in preparation for CRUFTS and does very well.. On the day he wins his class and then takes AV Working BOB, he then goes on to take the Group 1 !

Winter starts to appear in the UK.. still not as cold as we’d like for our Freight Dogs but you have to work with what you’re given!

This month was yet again dedicated to trekking & backpacking at our own pace – Bliss!!

Arctictribe up their mileage to an average trekking total of 30 miles per trip.. each week each team is completing an average of 50 miles in harness at an average pace of 6-7mph

Sampson does a spot of backpacking with the lovely ‘Rosy’ owned by Suzy Fithern.. Sampson completes his 2nd AMCA WPD leg and his 3rd AMWA Bronze leg this month..

Sampson at the end of a backpacking leg looking very chilled!

This month also see’s Leo go on his holidays with team mate ‘Shyla’ and adoptive dad ‘Glen Ward’ – They take part in the largest UK Sled Dog Rally of it’s kind in Aviemore.. The Siberian Husky Club of Great Britain 33rd Aviemore Sled Dog Rally 2016.. We are over the moon with the teams results!! ……..  3rd Fastest All Malamute Team in their class out of double figure entries over 2 days of racing… WAY TO GO LEO, SHYLA & GLEN!!!