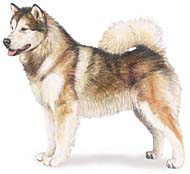 The Alaskan Malamute, one of the oldest Arctic sled dogs, was named after the native Inuit tribe called Mahlemuts, who settled along the shores of Kotzebue Sound in the upper western part of Alaska, within the Arctic Circle. Bone and ivory carvings dated to 20,000 years ago show ancient Malamutes almost identical to today’s breed. Malamutes babysat the Mahlemut children while parents were out on hunts which is one reason they make very good family pets. Their use of dogs was a partnership for survival. In summer, the Mahlemut people fished and hunted inland. In winter, they hunted sea mammals on the coast. Dogs assisted in hauling their possessions between spots, tracking polar bears and other quarry, hunting seals, moving meat from the hunt back to their base and with the hunt itself, as well as lookouts for bears and guarding caribou herds.. Often, they neutered all male dogs except the lead dogs. This ensured that females were bred only by the best dogs. Traits were maintained by the most basic criteria – survival. The dogs that prevailed were most suited for the environment, and for the work. When the first outside explorers came to the region in the 1700s, they were impressed not only by the hardy dog but also by their owners’ obvious attachment to them. Early writings indicate that the dogs kept by the Mahlemut people were better cared for than was usual for Arctic sled dogs, and this seemingly accounts for the breed’s affectionate disposition.Recent DNA analysis confirms that tVisit AKC Alaskan Ma

This dog was never destined to be a racing sled dog; instead, it was used for heavy freighting, pulling thousands of pounds of supplies to villages and camps. It is a heavy-boned dog, with powerfully built, strong shoulders. When working, the Malamute shows a steady, balanced, tireless gait. It is not built for speed, but for heavy draft work.
Such was the prowess of the malamute that Eskimos who lived inland traveled down the Kobuk and Noatak rivers to Kotzebue Sound to trade furs for dogs and supplies. Thus did malamutes find their way to other regions of Alaska and even to adjacent parts of the Yukon, where the gold diggers and some of the dogs that had accompanied them to the Yukon made the malamutes’ acquaintance some 100 years ago. (Additional testimony to the malamutes’ hegemony was the use of the word Malamute to indicate any freight-pulling dog). (“If Looks Could Thrill”)

The Alaskan Malamute is the native Alaskan Arctic breed, close cousin to the Eskimo dogs of Canada, Greenland and Labrador, cousin to the Samoyed of Russia and Siberian Husky (Kolyma River Region). As a group these dogs are referred to as “Northern”, “Nordic”, “Spitz-type” or “Arctic” (all refer to a dog characterized by a natural, fox- or wolf-like head with erect ears; double coat with harsh, weather-proof outer coat and a dense, woolly undercoat; well-knuckled, thickly padded feet; and a tail which rises over the back to some degree). Also in this group are Japan’s Akita and the smaller Shiba Inu, as are the Norwegian Elkhound and Buhund, Finland’s Karellan Bear Dog, Holland’s Keeshond and many others.

As with the breeds referred to above, the Alaskan Malamute is considered a “primitive” breed, in that it has been around for millennia, and not just centuries (or less), as is the case with many of today’s “modern” breeds. This means the original temperament and instinctive behavior patterns remain strong in this breed accustomed to unthinkable hardship and deprivation.

There is a natural range of size in Alaskan Malamutes. Malamutes in weight are “standard” size 65-85, but can weigh up to 140lbs or more, which are considered the Gentle Giants. The “standards” were created originally by one person’s modern vision of an ideal malamute (who also never bothered to go to Alaska or the Arctic) and reluctantly increased slightly upward after great political infighting within the AMCA in the 1950s. The functionality for what the dog was originally intended is more important than the size.

The Alaskan Malamute is a member of the Working Group and was first registered by the AKC (American Kennel Club) in 1935.

A big heartfelt thank you and Credit to Sheryl Franklin of Sheryl’s Alaskan Malamutes for allowing the reproduction of her research about the Alaskan Malamute.. enabling others to learn the origins of the breed.