Both our children Ayla & Hayden along with…..Maddy, Emme & now this year Elmo
are awarded with the
‘KODI Memorial Trophy’ for the Highest Placed ABSA Junior Alaskan Malamute Team,
their names are all engraved on the trophy… making Arctictribe very proud indeed…. 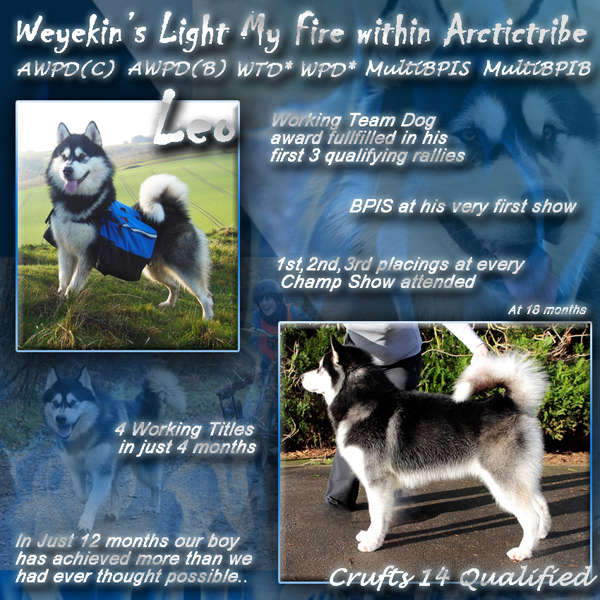 Leo and Ria are back on the trails at a 2 day event at the start of this month .. this time with Vikki at Sherwood Forest.. what an amazing weekend they have!!.. yet again the duo come home with some fantastic placings…
Day 1 see’s them gaining 3rd place… then day 2 another amazing 2nd place!! this was also a mixed freight class..
And another cherry on the cake means Leo has now fullfilled the requirements to be awarded with the title of the AMCA WTD!! His 3rd working title at just 16 months of age…so subject to confirmation our boy will have the following Sunday name:

The following weekend Leo and his friend ‘Denali’ venture out on a 10 mile hike to complete leg 2 of his AMCA WPD award..

Leo and Ria battle the trails again for their last race of 2013 at a 1 day rally.. they come a very well earned 4th place yet again this was a mixed freight class

At the end of December Leo and Mark embark on a mammoth backpacking trip of 20 miles over some tough terrain starting his AMWA Silver Pack Dog award!!
Leo carried his 11kg in his pack effortlessly.. completing this trip means Leo has fullfilled his requirements for his AMCA WPD ..his 4th working title!! so after confirmation Leo will be known as:

all this at just 17 months in age….. Arctictribe are immensley proud of this boys working attitude!!

Leo completes his Bronze Backpack Level, a total of over 40 miles carrying 20-30% of his bodyweight..he is awarded with his second Working Title at just 16 months old. He will now proudly be known as….

Leo & Ria battle the trails at ABSA New Forest rally to achieve the 2nd fastest all Alaskan Malamute team!!
Please click on the press release below to read more

Early in the month sees Leo complete his Copper Backpack Level, a total of over 40 miles carrying 10-20% of his bodyweight..he is awarded with his very first Working Title at 15 months old. He will now proudly be known as….

During the first 3 weeks of this month ‘Leo’ completes 2 legs towards his AMWA Bronze Backpacking award..
both over 10 miles a leg carrying over 20% of his bodyweight.

Both puppies ‘Penny’ and ‘Sampson’ graduate from ‘Puppy School’ this month..
they have learnt lots of life skills and will now put them into practice… well done puppies!!!

The end of the month see’s our precious boy ‘Leo’ compete in his very first UK sprint rally with his new team mate ‘Ria’
win a wonderful 6th place over 2 days of racing against 18 other strong teams
in M2 at AMWA’s Halloween Rally in Thetford Forest
Leo also battles the trails again with our son Hayden in J1 ..
they also win 6th place in a mixed class of Malamutes and Siberian Huskies!!
Please click on the press release below to read about Leo and Ria’s achievements together

Please join us in welcoming our new baby boy ‘Sampson’ into the tribe.. a very handsome and happy young man..
**** Northspirit Born For Glory within Arctictribe **** 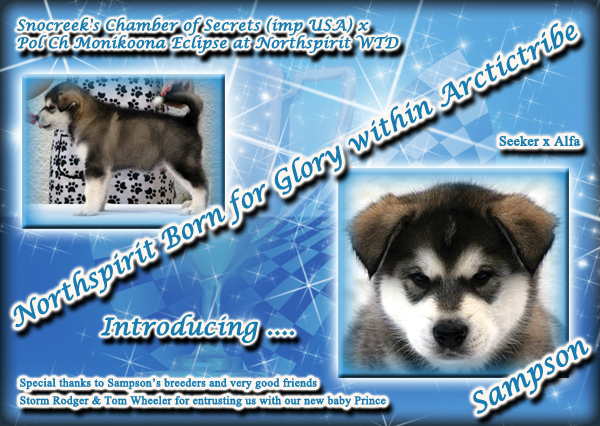 Leo’s hip score arrives and is a very pleasing score.. both hips are completely even and under the breed average.

The whole family attend AMWA’s annual fun weekender at Salisbury plain..
A great few days were enjoyed and some fun show results were also gained..
Leo gains a very respectable 4th in a huge class of 21 in the ‘Young Dog class’,
he then goes on to gain a 2nd place in ‘Beautiful Black/Whites.
This weekend also saw Leo and Elmo have their first team run together before the rally season begins.

Please join us in welcoming our new baby girl ‘Penny’ into the tribe.. a beautiful baby girl with a very big heart..
**** Monikoona Lucky Penny within Arctictribe **** 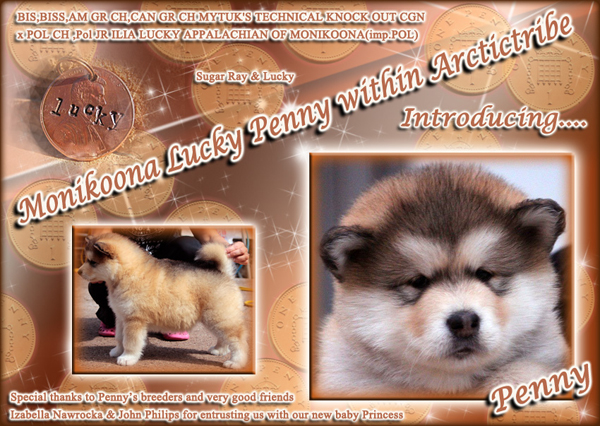 At the end of the month Leo attends his final Championship show of the year and wins a wonderful
2nd place in a strong Junior dog class!

On the 2nd of July a very special litter was born, see the ‘Coming Soon 1′ page in ‘Our Pack’

On the 8th of July another very special litter was born, see ‘Coming Soon 2′ page in ‘Our Pack’

Leo continues his winning streak in the show ring this month, by gaining a 2nd place in Junior Dog at EofE Championship show in a very strong class, and then a week later at NWPBS Championship show, he wins the Junior dog class 1st JD!!.. he then goes on to win 2nd place in Graduate Dog against some wonderful examples of the breed.
He doesn’t stop there.. the next day he wins yet another Junior Class 1st Junior at Evesham Open Show, then gains another 2nd in Junior Dog at AMCUK’s Speciality Breed Club show! ..
Hugely proud of our boys show success also considering that in every one of these classes Leo was the youngest in the class!!

Lovely family news for Leo’s sister ‘Summer’ ‘Weyekin’s Here Comes Summer‘ who comes away from her first ever show with top honours!!..
Summer wins her 2 classes making her ‘Best AV Working Puppy’, ‘Best Puppy in Breed’ ‘BPIB‘.. then she goes on to win ‘Best Opposite sex in Breed’ BOS‘ and ‘Reserve Best of Breed’ RBOB‘.. but the day doesn’t stop there!.. Summer then goes on to be awarded with ‘Best Reserve Working Puppy’ ‘WPG2‘ !!! way to go Summer!

Later in the month Leo and Natalie attend a local dog show, Leo is on top form and despite being between coats… In the novelty classes he gains 2nd in ‘Most appealing eyes’. In the main Pedigree classes he wins his puppy class, 1st AV Puppy, he is then awarded Best AV Puppy, the awards continue and in the BIS Challenge Leo is placed with a fantastic……

On the 20th June 2013 a very special young lady decided her time with us was to be no more……
Our gorgeous little whirlwind who left our lives in quite the same way she entered our lives……
Out of The Blue……..
Your special people have been left numb with shock.. We are so deeply devastated at your passing, We miss you more words can say…..
We cannot bring ourselves to say goodbye… So until we see you again you will be in our hearts always…..
Our precious baby girl……

A truly lovely start to the month sees the whole tribe attending AMWA’s Cheddar walking weekend. The weather was perfect, cool enough for the main walk then the sun coming out once the pub was reached for a well earned traditional pint of Cheddar cider…

During the weekend both Elmo and Emme gained their first legs towards AMWA’s WPD Copper level..
Leo also continued the start of his backpack training by wearing a minimal weighted backpack completing the medium walk.

Elmo, Emme & Leo attended the end of season ABSA Working Sled Dog Speciality Show, they were all shown by Natalie and came away with a huge haul of Lovely prizes.. The results of the day were as follows:

Leo won 3rd place in Cutest Puppy & 2nd Place in Puppy only Beaten by the RBPISS winner !!
Emme won 2nd Place in Youth Dog/Bitch only to be beaten by the BISS winner!!!
Elmo was however the star of the day.. and won 1st in Best Rescue/Rehome.. and then went on to win….

And the magic continues this month seeing our baby boy Leo Qualify for the Worlds most prestigous Dog Show…!!
At his very 1st Championship show Leo Qualifies for CRUFTS 2014 in the Puppy Dog class at just 10 months old!..
But just to make sure of his Qualifying status.. Leo then goes on to win 3rd place in a strong Junior dog class!!..

This month sees Leo being awarded with Reserve Best of Breed & Best Opposite Sex at the tender age of 7 months!!
He also wins Best Any Variety Working Puppy.. A great start to the month

The same weekend Emme and Elmo travel to Wales with Mark and complete a long distance trek on rough terrain organised by AMWA.. interestingly the team are consistent on their pace averaging between 7-8mph

Mark competes at ABSA Hero’s Quest Charity rally with Emme & Elmo having fun and raising money for a good cause!

To end the month the whole tribe attends AMWA’s 3 stage Rally over 2 days.. Emme and Elmo competed as 2 x 1 dog teams.. Elmo completed 2 of the stages but the star of the weekend was Emme.. who completed all 3 stages and was awarded a very respectable 4th place overall..
This was the last rally of the 2012/2013 season until November this year.. which will see Leo competing in his first rally!

The start of this month sees Emme complete the requirements for her WPD title from AMCA..
she has hiked a total of 44 miles carrying 30% of her bodyweight
Emme also gained a leg towards AMWA’s Working Pack Dog Bronze level

This month continues to amaze us…
We are VERY proud to announce that at his very first show aged a tender 7 months old, ‘Leo’ ‘Weyekin’s Light My Fire within Arctictribe’ is awarded…

On the day Leo wins his puppy class, then wins the junior class, takes the Working Puppy Group & Adult Working Group 2..then goes into the BIS ring to be awarded with BPIS !!!!

What a way to start his show career!!

So it continues…. at only his second show Leo is awarded with Best Puppy in Breed!!!
and then goes on to win Working Puppy Group 4 in a strong big Puppy Group!!!!

The celebrations for Arctictribe this month don’t stop there…

other working awards see Emme ‘Chayo Out of the Blue within Arctictribe ‘WTD’ completing her first full working season with Elmo to gain 6th Top ABSA DF Champion UK team for the 2012-2013 season!!!

We attend and complete 2 lots of 2 day ABSA Championship Rally events this month, Wareham & the Forest of Dean.
The team consistently deliver their average pace of 7-8mph in all events.. Mark making sure he only helps them when absolutely necessary.

This month sees Leo start his Kennel Club Good Citizen training classes with Mark, he is currently working towards his KC Foundation award and thoroughly enjoying it.

A lovely cold January with the added bonus of snow!
Happy New Year to you all from Arctictribe 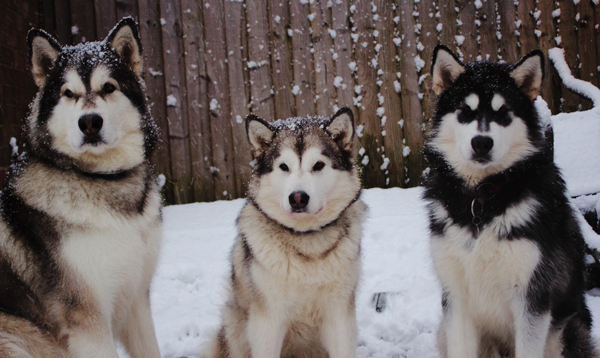